Emma Raducanu takes another notable step in her burgeoning career when she makes her senior French Open debut in a tournament where a wave of young stars are ready to further stamp their mark.

The British number one will be seeded 12th in a women’s singles draw headed by Poland’s Iga Swiatek, the 20-year-old who has dominated the women’s tour in 2022.

Spanish teenager Carlos Alcaraz is among the favourites in the men’s singles after a stunning start to the year.

But the 19-year-old will have to overcome and outlast the challenges of fellow Spaniard Rafael Nadal and Serbia’s world number one Novak Djokovic.

Cameron Norrie, seeded 10th in the men’s draw, is the highest-ranked British singles player at the clay-court Grand Slam.

The French Open starts at Roland Garros in Paris on Sunday, with the singles finals taking place on 4 and 5 June.

After the past two editions were disrupted by the coronavirus pandemic, the event returns to full scale with no restrictions on spectators.

French fans will also see a final-set tie-break at the tournament for the first time, with all four Grand Slams agreeing to use a first-to-10 points method at 6-6 in the decider.

In another first at Roland Garros, night sessions – scheduled at 19:30 BST from the opening Monday to the second Wednesday – will be played in front of full stadiums.

While Raducanu has achieved so much already in her short professional career, she continues to break new ground and this will be her first time in the French Open main draw.

The 19-year-old only made her senior debut on the clay during Great Britain’s Billie Jean King Cup tie against the Czech Republic last month, following that up with some positive performances in Stuttgart and Madrid.

However, Raducanu has been hampered by a back injury in recent weeks and it forced her to retire from an Italian Open first-round match against Canada’s Bianca Andreescu last week.

The problem is the latest in a series of niggles that have dogged the US Open champion in her first full year on the WTA Tour and she said it had “definitely thrown into doubt” her participation at Roland Garros.

“It is something I really wanted to play, it is a Grand Slam and you don’t want to miss it,” said Raducanu, who will open her campaign against a qualifier.

“Last week after Rome I definitely had to slow down, but this week I have been training and luckily being able to practise all of the shots.

“I have been doing more in the gym to try and fire up those muscles, keep the stability, and do some rehab.

“This week I have been training pretty good and looking forward to getting started.”

In the opening five months of the 2022 season, two of the sport’s brightest young stars – Swiatek and Alcaraz – have emerged as dominant forces.

World number one Swiatek has won five consecutive titles – Doha, Indian Wells, Miami, Stuttgart and Rome – in a 28-match winning streak that leaves her the clear favourite for a second French Open title.

The Polish player, who won her maiden Grand Slam as a teenager at Roland Garros in 2020, took over as the WTA’s top-ranked player following Australian Ashleigh Barty’s shock retirement in March.

“I think the key is going to be just doing the same stuff I did before,” she told WTA Insider.

“Right now, at these tournaments, I already faced a lot of pressure. So hopefully the different kind of pressure that we have at a Grand Slam isn’t going to overwhelm me.”

Defending champion Barbora Krejcikova is seeded second but the Czech left-hander has not played since March because of an arm injury.

While Swiatek is the runaway leader in the year-end race, Tunisia’s Ons Jabeur is another in-form player having won the Madrid Open before the Pole ended her 11-match unbeaten run in the Rome final.

American great Serena Williams is not playing in Paris as questions remain about the 40-year-old’s future, while her coach Patrick Mouratoglou has recently teamed up with 2019 Roland Garros champion Simona Halep.

Japan’s four-time major champion Naomi Osaka returns to Roland Garros, where she pulled out of the tournament 12 months ago and revealed she had been suffering from depression.

The 24-year-old former world number one, now ranked 38th, took a break from the sport at the end of last year to look after her mental health. She has played five tournaments in 2022, reaching the final in Miami, but withdrew from Rome with an ankle injury.

She has a tough first-round draw as she faces Amanda Anisimova – the young American who ended her Australian Open title defence in January. 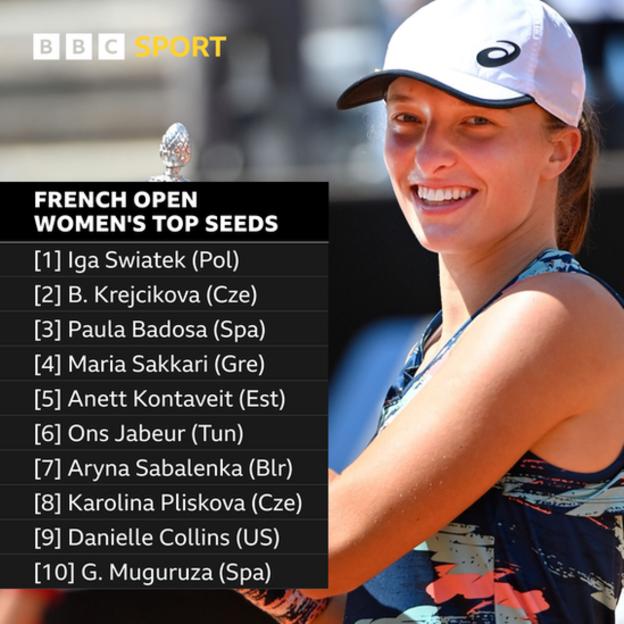 Alcaraz has won more ATP titles than any other player this year, having triumphed in Rio, Miami, Barcelona and Madrid.

The Spaniard, seeded sixth, has won 28 of his 31 matches this year, giving him the highest winning percentage on the men’s tour in 2022.

After claiming the Madrid title – where he beat Nadal, Djokovic and Alexander Zverev – he was labelled the “best player in the world right now” by the German world number three.

“People are going to think that I’m one of the favourites to win Roland Garros,” Alcaraz said after thrashing Zverev in the final.

Nadal and Djokovic still the men to beat

Nadal, who turns 36 on 3 June, is bidding for a record-extending 14th title at a tournament that he has dominated like no other player has done anywhere else.

But the Spaniard is trying to cope with a foot condition he thought was going to end his career last year.

“I am not injured. I am a player living with an injury. That’s it. It is nothing new. It’s something that is there,” the 21-time Grand Slam champion said.

“Unfortunately my day-by-day is difficult, honestly. Even like this, I am trying hard. Of course, it’s difficult for me to accept the situation sometimes.”

Nadal is in the same half of the draw as Djokovic and Alcaraz, and he could face the Serb in the quarter-finals.

Last year Nadal lost to Djokovic in the semi-finals – only his third defeat in 108 matches at Roland Garros – before the Serb fought back from two sets down against Greece’s Stefanos Tsitsipas to secure his 19th Grand Slam title.

A month later Djokovic equalled Nadal and Roger Federer’s then all-time record of 20 men’s major titles when he won Wimbledon.

That particular race – with Federer still out with a knee injury – remains delicately poised.

Nadal took advantage of the pair’s absence at the Australian Open – when nine-time champion Djokovic was deported from the country following a visa row which stemmed from him not being vaccinated against Covid-19 – with an incredible win over Russia’s Daniil Medvedev in the final to go clear of them.

Djokovic, who turns 35 on Sunday, is now seen as the favourite in Paris after showing he is building towards his best form by winning the Italian Open title on Sunday.

“I go there with the highest ambitions. I like my chances. The way I’ve been feeling on and off the court in the last few weeks, I can go far,” said the 2016 and 2021 champion.

US Open champion Medvedev – one of a number of Russian and Belarusian players not allowed to compete under their national flags because of the war in Ukraine – is seeded second but only made his return to court this week in Geneva after a hernia.

Zverev and Tsitsipas – who lost to Djokovic in the Rome final on Sunday – are the other leading seeds.

Where’s Murray? And what about the other Brits?

Raducanu is one of five Britons in the singles draws with the nation’s last singles winner at Roland Garros being Sue Barker in 1976.

Former world number one Andy Murray is not playing as he looks to reach peak fitness for the British grass-court season, leaving Raducanu, Norrie, 31st seed Dan Evans, Heather Watson and Harriet Dart as those with direct access into the singles draws.

British men’s number one Norrie is looking to transfer his fine ATP Tour form into a deep Grand Slam run. But, like Raducanu, he suffered an injury scare in Rome although he has since reached the Lyon semi-finals.

Norrie, 26, won the Delray Beach title in February and lost to Nadal in the Acapulco final, building on his breakthrough 2021 season to move inside the world’s top 10 for the first time.

Last week Norrie limped out of the Italian Open in a loss to Croatian veteran Marin Cilic, troubled by his right foot and needing treatment in the third set.

In the doubles, British world number one Joe Salisbury is aiming for a third Grand Slam title alongside American Rajeev Ram, while Neal Skupski and Dutch partner Wesley Koolhof go into the tournament as the leading team in 2022.

Skupski, 32, and Koolhof have won four ATP titles and reached two other finals together.

Lucy Shuker, seeded fifth in the women’s draw, is aiming to build on her semi-final appearance at the Australian Open, while Andy Lapthorne – who reached the Paris final in 2020 – is Britain’s sole representative in the quad singles. 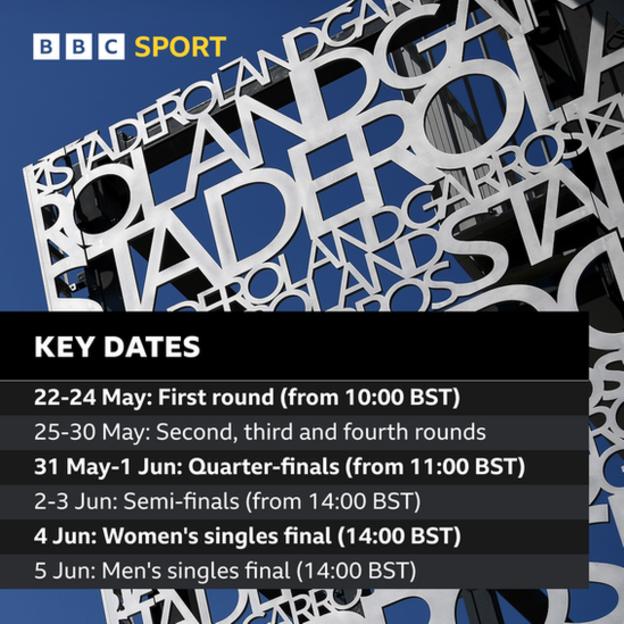 From Ozzie to Orel: The greatest numbers from 1 to 55 in baseball history

What team improves by trading TWO all star caliber talents for...