Brighton manager Graham Potter is favourite to replace Antonio Conte at Tottenham. Brighton would want £10m compensation from Spurs should Conte leave at the end of the season. (Telegraph)external-link

Conte has warned Spurs they will need to spend big in the summer or risk needing a “miracle” to catch other teams. (Evening Standard)external-link

Incoming Manchester United manager Erik ten Hag wants Portugal forward Cristiano Ronaldo to stay at the club. The 37-year-old has one year left on his contract at Old Trafford. (Telegraph)external-link

Former Manchester United boss Ole Gunnar Solskjaer is ready to return to management and has received approaches, including from other Premier League clubs. (VG – in Norwegian)external-link

Christian Eriksen is considering remaining at Brentford next season. The Denmark midfielder, 30, had been linked with a return to Tottenham and a move to Leicester. (Telegraph)external-link

France forward Kylian Mbappe, 23, will announce his final decision over whether he will leave Paris St-Germain in June. (Le Parisien – in French)external-link

Chelsea are frustrated they were unable to sign Borussia Dortmund and Norway striker Erling Haaland, 21. The club have been limited in the transfer marker because of sanctions against owner Roman Abramovich following Russia’s invasion of Ukraine. (ESPN)external-link

Fulham manager Marco Silva says Portuguese forward Fabio Carvalho will not be at the newly promoted club next season. Liverpool have agreed a deal worth £7m for the 19-year-old. (Liverpool Echo) external-link

The Hammers are also plotting a bid for Chelsea striker Armando Broja after the 20-year-old’s impressive loan spell at Southampton. (Sun)external-link

Leicester manager Brendan Rodgers is determined to refresh his squad in a move that could see several first-team players leave the club. (Mail)external-link

Chelsea manager Thomas Tuchel says Belgium striker Romelu Lukaku remains an important part of his plans for next season, despite the 28-year-old being linked with a return to Inter Milan. (Mirror)external-link

Barcelona have reached a breakthrough in their talks with 17-year-old Spain midfielder and Liverpool target Gavi. (Teamtalk)external-link

Wolves midfielder Ruben Neves would prefer to stay in the Premier League if he leaves Molineux at the end of the season. The Portuguese, 25, has two years left on his contract. (Mail)external-link 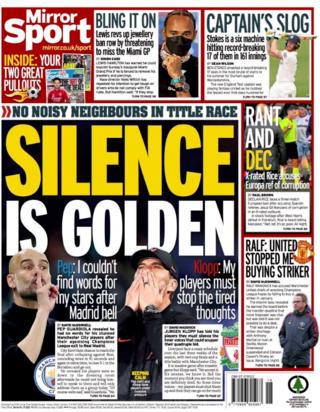 The back page of Saturday’s Mirror

Gore says he plans to retire as member of 49ers