The last time somebody did what Shohei Ohtani just pulled off — being a game’s starting pitcher while leading the major leagues in home runs — was June 13, 1921. Babe Ruth had already accumulated 19 homers when he took the mound against the Detroit Tigers that day. Ruth batted third and homered two more times, but he also gave up four fifth-inning runs and exited thereafter. It was the last start Ruth would make until 1930. By then, his two-way prowess was a distant memory.

His Monday start, on the road against the Texas Rangers, began with a reminder of how difficult it is to pull off what he’s doing and ended with affirmation that Ohtani might just be able to do it anyway. In the first inning, he allowed five baserunners, served up a three-run homer and threw only 11 of his 29 pitches for strikes. From the start of the second inning to the end of the fifth, he retired 12 of the 13 batters he faced — eight on strikeouts, five of which came consecutively. 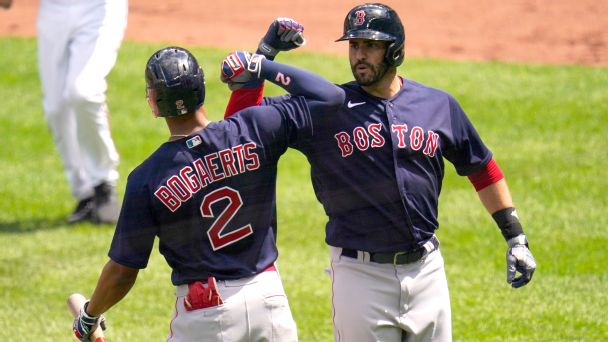 Baseball is back! Catch the 2021 MLB season on ESPN and the ESPN App.

Sunday, May 2
Mets-Phillies, 7 ET on ESPN

Ohtani also produced a 52-foot bunt and a 113.8 mph line drive, both of which went for hits. He scored three runs, drove in two others and could have had at least one stolen base had Angels manager Joe Maddon not given him the “hold” sign because it was all just too much.

Ohtani clearly has the power and the bat control and the speed to be an elite offensive player. He also possesses the stuff and the feel to succeed as a pitcher, and the discipline and the competitiveness to juggle two roles. The only noticeable impediment — aside from blisters, another of which surfaced on his middle finger in the later innings Monday — is command.

Ohtani’s command was noticeably off six days ago when he returned from a 16-day pitching hiatus to start against the Rangers, as he issued six walks and hit a batter but somehow did not give up any runs through four innings. It was off again Monday in the initial portion of the rematch from Globe Life Field in Arlington, Texas, when he fell behind each of the first five hitters he faced.

On a 0-to-100 scale, Ohtani gave his command “a zero” in his first meeting against the Rangers.

After his second, he bumped it to “a five.”

He believes it’ll get significantly better.

“I felt like my command from the second inning on was pretty good,” Ohtani said through his interpreter, “so I just need to continue to build off that.”

Maddon began his second year as the Angels’ manager intent on lifting the fabricated restrictions that confined Ohtani and granting him the freedom to play without limits. Through that, he began to see more of Ohtani’s quirky humor and steely competitiveness spill out. Hitting on the day he pitches, Maddon believes, benefits Ohtani because it doesn’t grant him the bandwidth to dwell on either aspect.

It played out that way on Monday.

After Ohtani’s four-run bottom of the first on the mound, he stepped into the batter’s box in the top of the second, lined a two-run double to right field, then came around to score on Mike Trout’s single, tying the game. When Ohtani returned to the mound again, he approached it like a “fresh start.”

“I treated it like it was a brand new ballgame,” Ohtani said. “Everything went smoothly from there.”

Ohtani relied heavily on his fastball to get ahead of hitters, then utilized his splitter to put them away, using the latter pitch to record seven of his nine strikeouts. At times he also flashed a firmer slider with less depth that resembled a cutter. Maddon noticed a cleaner delivery and sharper command because of it, the type of drastic adjustment he has seen Ohtani make previously. It earned him his first win since May 20, 2018.

“He never panicked,” Maddon noted. “When things were going poorly, his demeanor didn’t change, his resolve didn’t change out of his face. He knew he had to make an adjustment, so it wasn’t any emotional riff that led to him becoming better over the course of that game. He doesn’t start speeding up, and that’s why he’s able to make those adjustments.”

The inconsistent command, Maddon said, could simply be the result of someone who compiled only 79⅔ innings from 2017 to 2020 and is still getting comfortable on a major league mound. Even when it wavers, Maddon added, Ohtani remains exceedingly difficult to hit — a sign that eventually, as happened Monday, the dominance might follow.

“When he goes through those moments,” Maddon said, “you just have to fasten your seatbelt and watch.”

Looking back at the greatest shots in NBA Finals history