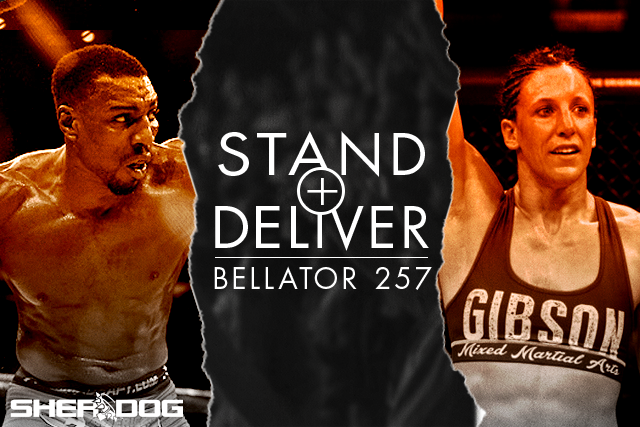 In some ways, a win is a win and a loss is a loss. But while it is
true that every fight matters, some feel as though they
matter more, for any number of reasons. In some cases, the elevated
stakes are easy to quantify. Picture the fighter on a losing streak
who knows he or she is likely fighting for their job; or
conversely, any matchup on Dana White’s Contender Series, where two
hopefuls know that the brass ring is within their reach if they can
win impressively. In other cases, a fight feels especially
important for reasons that are harder to quantify, but no less
real. Whether it’s the symbolic heft of representing one’s country,
or the simple added spice of two fighters who really hate each
other’s guts, that fight means just a little more.

On Friday, Bellator 257’s 13-fight card features a
reigning champion, two former champs, a trio of undefeated
prospects and a pile of contenders in need of a bounceback win. And
to top it all off, the Bellator MMA Light Heavyweight Grand Prix, which
launched last week, will see its quarterfinal round three-quarters
of the way done by the end of the night. High stakes abound, but
here are three fighters who are under just a little extra pressure
to stand and deliver.

Don’t Let ‘Em Do You Like This, Pedro
Carvalho

What can you say for a man who went from a main-event title
challenger in his last fight to the middle of the undercard this
weekend? Ouch. Yes, the main event in question was a featherweight
grand prix quarterfinal, and Carvalho got starched in half a round
by Patricio
Freire, but “Pitbull” does that to a lot of people, and
Carvalho had earned his way to that title shot fair and square with
a six-fight win streak, the last four of them in the Bellator cage.
However, Carvalho now gets to live the harsh reality of Bellator’s
deepest division, as not only has he been consigned to the prelims,
he is being matched up with 7-0 prospect Jay-Jay
Wilson. Bellator does an admirable job of building young
talent, even when it involves feeding the old lions to the new;
think Adam Borics
vs. Aaron Pico.
Adding insult to…well, insult, Carvalho is a slight underdog to
Wilson.

Still just 25, Carvalho has prospects in the division. In
particular, if the Grand Prix final between “Pitbull” and A.J. McKee
yields a new champ, Carvalho will be one of the most prominent
145ers the “Mercenary” hasn’t already faced on his 17-fight journey
to the top. There might be a fairly quick route back to another
title shot for Carvalho, but it starts with putting away Wilson on
Friday, sending Bellator matchmakers the message that he’s not
ready to be sent down the featherweight food chain — or the bout
sheet — just yet.

Speaking of falls from grace, a little over a year ago, Budd was
Bellator champ and had been by consensus no worse than the No. 3
woman in the world in her weight class for probably five years. In
fact, until Cristiane
Justino’s shocking loss to Amanda
Nunes, “Cyborg” vs. Budd was the featherweight dream matchup we
despaired would never happen.

Last January, Justino handed Budd her first loss in eight years,
wresting the title from her and adding it to her own considerable
trophy case. Budd bounced back with a dominant win over Jessy Miele
last August, but the fight was frankly kind of a stinker, and so
“The Jewel” finds herself busted down from headlining champion, to
co-main event, to the prelims, in the space of three fights. The
good news is that Bellator signed 9-5 Dana White’s Contender Series Brazil reject
Dayana
Silva to debut against Budd, and she is currently hovering
around +1000 on the sportsbooks. The bad news — or at least the
caveat — is that against such a hugely overmatched opponent, Budd
needs to do more than just win another one-sided decision if she
wants to stoke any interest in a “Cyborg” rematch. Budd is 37 years
young — her stepson Lance
Gibson Jr. is fighting on Friday’s undercard as well — and
proving that she is still champ material begins with doing champ
things to Silva this week.

Davis is the most underappreciated light heavyweight of his era,
and I don’t even think it’s very close. He’s 22-5, and all five
losses have been to super-elite fighters. He has never lost back to
back fights. He has never been finished, and in fact his last three
losses have all been split decisions. In Vadim
Nemkov’s five-fight reign of terror in Bellator, Davis is the
only man Nemkov hasn’t finished. He has been a Top 15
fighter for a full decade, and yet has continually improved his
game over that time; he is a far better striker now than he was in
his UFC heyday seven or eight years ago.

All that being said, Davis is at risk for becoming — or remaining —
a forgotten man at 205. Even I, who follow Bellator closely and
cover this sport professionally, am occasionally surprised to
remember that Davis actually won the Bellator light heavyweight
title. For that reason, Davis appears in this column today even
though all four grand prix quarterfinalists have plenty to fight
for: Nemkov, obviously, holds the title and is defending it each
time out. Dovletdzhan
Yagshimuradov is a complete unknown to most Western fans and
has exactly one fight to prove he isn’t just another CIS hype job.
Corey
Anderson wants to show that the UFC made a huge mistake in
letting him go so easily in his competitive prime.

Davis is 36 and showing no particular signs of slowing down, and in
any event, lightning-fast reflexes have never been what drove his
game. However, the perception is that Nemkov has improved
enormously in the two and a half years since their first meeting,
while Davis has been more static. A win on Friday would prove that
perception wrong while at the same time making Davis a two-time
Bellator champ and avenging a loss. To accomplish all those things
in one night’s work would be…wonderful. On the other hand, if he
loses, he will be 0-for-4 against Nemkov and Ryan Bader,
the two best fighters he has faced. And with the grand prix just
getting underway, tying up the cream of the division, his chances
of getting another big matchup any time in the next year or so will
be severely compromised.

Blood Diamond Is Ready To Shine

6 NBAers, including Gilgeous-Alexander, set to play on Canada's World Cup...