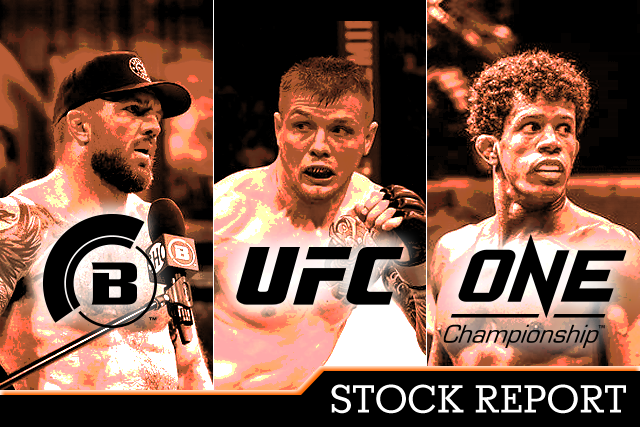 Let’s autopsy a uniquely packed week in mixed martial arts, shall
we?

Between
One Championship on TNT 1,
Bellator 256 on Showtime and
UFC on ABC 2, we had a colossal feast of fights on which to
gorge ourselves. We also had the added intrigue of arguably the
three biggest promotions in the sport, all on their first or second
events with a new broadcast partner.

With three combat sports giants going head-to-head-to-head — not
literally, as they aired on three different nights, thank goodness
— it’s worth taking a look at the relative success of each card
from a competitive as well as promotional angle. Here is the stock
report for what we’ll call “The Big Three on TV.”

It isn’t the UFC’s fault that Darren Till
pulled out of the main event with a broken collarbone, and as
short-notice replacements go, a ranked fighter with the buzz of
Kevin
Holland was actually a fantastic get. On paper, that is. In the
cage, Marvin
Vettori bulldozed Holland, overcoming some danger on the feet
in the first three minutes and then going full wrestler for the
remainder of the fight, racking up a whopping 20 minutes of top
control. It was a smart tactical adjustment by the Italian, who
found himself in a high-risk, low-reward scenario against the
dangerous Holland, but it probably didn’t win him many fans. More
importantly, where a spectacular victory over Till might have
vaulted Vettori straight to a title shot, the grinding decision
against Holland leaves him more or less where he was before the
fight.

It’s anyone’s guess whether that dull main event would have ruined
an otherwise spectacular card, but the rest of “UFC Vegas 23” was
far from spectacular. There were a couple of eye-popping finishes
courtesy of Julian
Marquez and Jarjis
Danho, and two outstanding three-round fights. Several
fighters, including Arnold
Allen and Mackenzie
Dern, did wonders for their individual stocks. However, there
were also a couple of crushingly tedious rinse-and-repeat fights:
Joe
Solecki vs. Jim Miller,
in particular, should come with a warning label about operating
heavy machinery. The stakes just weren’t there, either, with very
few contenders on the card and several fighters on brutal losing
streaks. Ultimately — and this is a nuance that may even be
invisible to fans who came to the sport in the Ronda
Rousey/Conor
McGregor era — this was just another fight night. To understand
what I mean, look at the lineups of the first half-dozen UFC on Fox
cards; the UFC used to bust out the good silverware for broadcast
TV events, resulting in something halfway between a pay-per-view
event and a free Spike TV card in terms of quality. Those days are
gone, say sorry, and UFC on ABC 2 was by no means a disaster, but
Vettori’s win that doesn’t really advance him much is a good
metaphor for the whole show.

Bellator’s second event on Showtime delivered some of the best and
some of the worst the Bellator MMA promotional model has to offer. On the up
side, the main event featured the launch of its new light
heavyweight grand prix. Tournaments are fun, and have a way of
adding narrative weight and drama to the individual contests that
make up the bracket. For an example, consider the number of people
who follow regular-season NCAA basketball, compared to those who
tune in for “March Madness.” For as long as the UFC is run by
tournament-averse Dana White, they are also an instant point of
distinction for rival promotions.

While Bellator CEO Scott Coker — a lifelong martial artist, a
gentleman and by all accounts a stellar boss — would never do so, I
will jump in and say that Ryan Bader
winning in dominant fashion on Friday was a good thing for the
promotion. The man who took the title from Bader last fall,
Vadim
Nemkov, resides on the opposite side of the bracket, and a
rematch between the two is probably the easiest sell of any
possible grand prix final. Bader absolutely thrashed Lyoto
Machida, avenging a nine-year-old loss in the UFC and serving
notice that he still has some life left in him at 205. If Coker
follows through on his stated intention to create an interim
heavyweight title so that Bader’s light heavyweight success doesn’t
leave his other division in mothballs, everything is good.

The same cannot be said of the rest of Bellator 256. One thing that
Bellator probably does better than any other top-flight promotion
is scout and develop talent from the ground up. That means that
Bellator undercards are often jammed with 3-0 prospects, often in
matchups that are…let’s say, “designed to be winnable.” There’s
nothing wrong with that; it’s closer to the boxing model and I wish
more promotions would do it with truly promising talents. And it
often pays off even from an entertainment standpoint, with 10-to-1
favorites delivering brutal finishes over sacrificial lamb
opponents. Friday night was not one of those times, as six of the
eight undercard fights went to the judges, which meant a whole lot
of time watching maybe-good-someday fighters squaring off against
probably-never-good fighters. Ick. Add in that the co-main event
between Liz
Carmouche and Vanessa
Porto was a dud that managed to make two Top 10 flyweights look
worse, and that one of Bellator’s best fighters, Goiti
Yamauchi, lost a horrible split decision, and this was a long
night in the FightSphere. When one of the highlights of the card
was 2-0 prospect/pinup Diana
Avsaragova plunking 1-2 Tara Graff,
that isn’t a good sign.

Because I’ve often been critical of One Championship’s practices in
the past, I feel I should start here by stating that the
organization did just about everything perfectly for its debut on
TNT. The lean, mean six-fight card offered a fantastic sampler of
what the Singaporean promotion does well, while leading with the
elements that would be most likely to grab and hold the attention
of American fans. The card featured two recent UFC stars in
Demetrious
Johnson and Eddie
Alvarez as well as massive Senegalese wrestler Oumar Kane,
who is equal parts sideshow attraction and legit heavyweight
prospect at this point. The promotion of kickboxing and muay Thai
bouts alongside MMA — a One trademark that I’ve always enjoyed —
got a further boost from the inclusion of Rodtang Jitmuangnon, one
of the promotion’s best and most exciting strikers. The decision to
put the event on Wednesday night, rather than counterprogram
Bellator or the UFC, was the right one, even if the time
zone-staggered delay was a misstep. All in all, it truly was a case
of One putting its best foot forward.

Unfortunately, we all know what they say about the best-laid plans
of mice and men. Kane’s debut on stateside TV went from intriguing
to farcical, as his opponents changed from Marcus “Buchecha”
Almeida, one of the greatest heavyweight Brazilian jiu-jitsu
artists of all time; to 4-3 Iranian wrestler Mehdi
Barghi; to Patrick
Schmid, a 35-year-old kickboxer with no professional MMA
experience. The end result, a two-minute mauling, was decent TV
while it lasted but gave us no indication of whether “Reug Reug” is
actually any good at fighting yet. Johnson’s knockout loss to
Adriano
Moraes was not a complete disaster from a promotional
standpoint. Moraes looked like a world-beater, winning the first
round before flattening a grounded “Mighty Mouse” in the second
with a knee strike that would have been completely illegal under
the Unified Rules of Mixed Martial Arts, but is perfectly fine
under One’s ruleset. As long as One Championship is prepared to
keep Moraes visible and busy with credible contenders, all is fine.
Alvarez’s loss to Iuri
Lapicus, in which he was disqualified in barely a minute for
blows to the back of the head, was hugely disappointing; even if
Alvarez had looked shaky in his first two fights for One, the
Alvarez-Lapicus fight promised to be a barnburner. Instead, it
fizzled out in seconds in a welter of confusion, disappointment and
the sobering news of Lapicus being transported to the hospital.
There are three more cards to come on this venture with TNT,
starting with an excellent Christian
Lee – Timofey
Nastyukhin title fight this Wednesday, but there’s no question
that this was a stumble out of the gate.

Kai Kara-France Is Primed To Bounce Back

Alexander Volkanovski Eager To ‘Stir The Pot’ On The Ultimate Fighter