The 2020 MLB playoffs are right around the corner, even though it seems like only yesterday that the regular season kicked off. Well, it wasn’t yesterday, but close enough. The compressed 60-game schedule is rapidly coming to a close, and the MLB standings are tight heading to the finish.

As has been the case with so much this season, the playoffs will have a new look, with an expanded format that includes 16 teams for the first time in MLB history.

This will be the place to visit every day through the end of the regular season for updated looks at the potential playoff field, recaps of the biggest games, analysis of the most important storylines and previews of the critical games ahead.

If the season ended today …

The matchups: Here’s what the first round of the expanded playoffs would look like, based on the standings entering play Monday, Sept. 14.

Mookie Betts has received most of the attention — rightfully so — but one of the biggest differences with the Los Angeles Dodgers this season is that their bullpen is especially deep. The best sign of that came Sunday, in an 8-1 victory, when seven relievers combined to limit a desperate Houston Astros team to just one run and five baserunners through the first eight innings. In the ninth, Kenley Jansen, who swiftly blew a three-run lead 24 hours earlier, retired all three batters he faced, giving the Dodgers three wins in four games against the Astros this season. 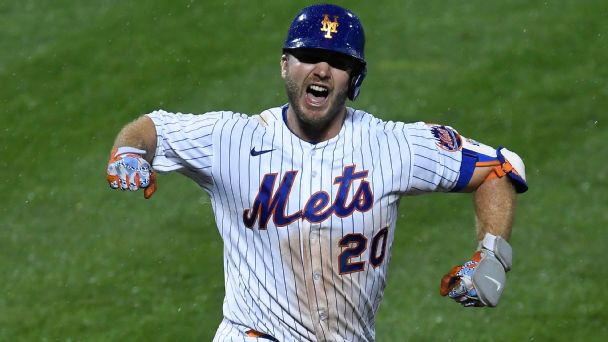 Most of the postseason field has taken shape, but the final NL spots will see a race to the end. Here’s who is best built to make it. David Schoenfield »

The Dodgers own an MLB-best 33-14 record and easily lead the sport with a plus-103 run differential. But they’re not perfect. Cody Bellinger and Max Muncy have had a hard time getting going. Second base is still an uncertainty because top prospect Gavin Lux hasn’t quite found his footing. Jansen has had two really bad outings in recent days. And the starting rotation is suddenly vulnerable with Walker Buehler (blister) and Dustin May (foot) nursing minor injuries at the wrong time. But the Dodgers have unmatched depth. It has been that way for years — but now it also resides in their bullpen.

“This is the deepest, most talented ‘pen by a full grade that we’ve ever had,” Dodgers manager Dave Roberts said after Sunday’s win. “We just got [Pedro Baez] back, we’re gonna get Joe [Kelly] back here soon, guys are having tremendous years. It’s a close group over there. Adding Jake [McGee] to the mix, guys that get left and right out, have specialty pitches that are unique, all that stuff. Certainly the best that we’ve seen.”– Alden Gonzalez

Also of note: The White Sox and Padres are the up-and-comers garnering most of the attention, but don’t sleep on the Buffalo, err, Toronto Blue Jays. New York’s finest haven’t lost any of their past nine series, with staff ace Hyun-Jin Ryu finishing off the Mets 7-3 on Sunday. The Jays open a three-game series at Yankee Stadium on Tuesday. After finishing a four-game sweep of the upstart Orioles that likely put Baltimore in the rear-view mirror for good, the Yankees sit a half-game behind Toronto for second place in the AL East. … Another surprising upstart, however, doesn’t seem to going anywhere. The Marlins swept a Sunday doubleheader with the Phillies to pass them and move into second in the NL East — and the way rookie Sixto Sanchez is dealing (a three-hit, seven-inning complete game Sunday), the Marlins could be a tough out in a best-of-three series. Yes, the Marlins.

Pennant race debate: Which unexpected contender is the biggest surprise and which one is the best bet to get past the first round?

Joon Lee: The emergence of the Orioles as a playoff contender definitely surprised me most, as I expected them to finish in last place in the AL East. Between Anthony Santander and Pedro Severino, the team has had some bright spots this season in terms of team continuity carrying over from last year. But among the surprise playoff contenders, I expect the San Francisco Giants to have the strongest chance to make it to the second round. This team has had its share of surprises this year between Mike Yastrzemski and Donovan Solano emerging as key offensive cogs, but the relatively young Giants still have a bevy of veterans with postseason experience, including Johnny Cueto, Brandon Crawford and Evan Longoria, who could help San Francisco pull off a first-round upset in what has already been a chaotic season.

MLB’s 60-game regular-season sprint is coming down to the wire. Catch the excitement on ESPN.

David Schoenfield: I’ll go with the Orioles as the biggest surprise. Coming off a 108-loss season that featured one of the worst pitching staffs of all time and a record number of home runs allowed, Baltimore basically did nothing in the offseason to supplement the roster. In fact, the Orioles’ biggest move was trading away their best position player, Jonathan Villar, just to dump his salary. But the O’s have played respectable baseball and somehow hung close to the eighth playoff seed. The Giants are the best bet to advance, however, thanks to a very good offense. There’s a little bit of 2010 in this team. That year, Aubrey Huff and Andres Torres were their two best players (by WAR). This year, it’s Mike Yastrzemski and Donovan Solano.

Bradford Doolittle: The Giants seem like the best bet just to get into the playoffs, which makes them the most likely to win two games in a first-round best-of-three. If the Marlins can sneak in, however, they seem like the best bet to pull off an upset (if there is such a thing in a best-of-three). That’s especially true if they don’t match up against another team from the NL East, as they’d be able to throw out some dynamic young arms that the opponent will not have seen much, if at all. The Orioles rate as the biggest surprise. I actually thought the Tigers would be a bit worse but also thought Detroit’s Central-only schedule would be considerably weaker, boosting them over the O’s in the standings. Baltimore might be in the process of getting knocked down by its slate right now, but they’ve done a great job of hanging in so far.

Twins-White Sox, Monday (8:10 p.m. ET on ESPN+): The AL Central race is tight enough, and neither the Sox nor Twins want to risk falling into third place and missing out on an automatic invitation to the postseason tournament.

Dodgers-Padres, Wednesday (4 p.m. ET on ESPN): Both teams in this growing rivalry will be in the playoff field, so this could this be an NLCS preview. Too bad the San Diego fans can’t see this one in person.

Cardinals-Brewers, Wednesday doubleheader (5:10 p.m. ET): The teams, both in the hunt for second place in the NL Central and/or a wild-card spot, play their second doubleheader in five days.

Mets-Phillies, Wednesday (7 p.m. ET on ESPN): The Mets are trying to stay in the playoff hunt, while the Phillies look to secure their spot in the tournament.