LAKE BUENA VISTA, Fla. — Dallas Mavericks star Luka Doncic was on the ground. He had just driven to the basket against the Milwaukee Bucks but didn’t get the foul call. His coach, Rick Carlisle, stepped in to defend him, as coaches do.

Portland Trail Blazers coach Terry Stotts had a similarly explicit reaction during his team’s game against Boston six days earlier, barking at a referee running past him after a call, “That’s bulls—!”

Both coaches’ objections were easily heard from the upper deck of the mostly empty AdventHealth Arena. Without crowd noise to drown them out, many on-court complaints and conversations in the NBA’s bubble are audible even to viewers of game broadcasts.

That lack of ambient sound in the three arenas being used at ESPN’s Wide World of Sports Complex in Florida has made for a different dynamic between referees and the players and coaches throughout a game.

“In my career, 10 years, I never would have heard an assistant from 70 feet away say, ‘Make the f—ing call!'” referee Josh Tiven said. “But you might hear that here.”

In the bubble, referees have had to rethink some of their approaches to the job. What do you do when you hear a foul you didn’t necessarily see? What is it like knowing that the viewing audience can hear your explanation of every call in real time? And how much slack do you give during those on-court confrontations that are suddenly under a larger microscope?

“It’s been an unusual experience, and nothing we could ever dream of,” said 26-year referee James Capers, one of the league’s most veteran officials. “It’s so unusual of a circumstance that I’m trying to take it one day at a time and just make the best out of it.”

REFEREES, OF COURSE, are accustomed to hearing on-court complaints.

“I mean, we’re next to them when we’re refereeing the games,” Monty McCutchen, the NBA’s vice president of refereeing and training, said with a laugh.

It’s one thing, though, for players and coaches to be shouting at referees when they can barely hear each other in an NBA arena full of screaming fans. It’s another when the conversations are happening in an empty arena that is more of a made-for-television soundstage.

Take, for instance, a scene from Monday’s opening game of the playoffs between the Utah Jazz and Denver Nuggets.

Jordan Clarkson let fly a 3-pointer that he thought was affected by contact from Jamal Murray. The Jazz guard jogged back down the court, jawing at Curtis Blair, the referee closest to him. As play continued, Blair eventually had enough and hit Clarkson with a technical foul.

The NBA playoffs have arrived! With the seeding games and Western Conference play-in complete, 16 teams are set to compete for the NBA championship at ESPN Wide World of Sports.

• 5-on-5: Fact or fiction for Game 2s
• How refs are dealing with bubble ball
• Everything to know about the playoffs
• Experts’ picks for all eight series

Utah coach Quin Snyder began yelling from the opposite side of the court as Murray went to shoot the technical free throw. At the end of his one-way, crosscourt conversation, Snyder turned and waved his hand in Blair’s direction.

That was enough for veteran referee Scott Foster to T up Snyder, too.

“What is that?” Snyder barked at Foster, whose expression didn’t change. After taking a few steps to clear his head, Snyder started again.

“That’s bad, Scott,” Snyder said. “I was talking about my own player.”

It was the kind of conversation that could happen on any night in the playoffs — except in this case, it was in the early afternoon and was clearly heard by both the scattered attendees in the building and anyone watching the broadcast.

Having these moments play out so noticeably and publicly is new for the 45 referees on campus and has led officials like Capers to really think about such interactions before they take place.

“The biggest adjustment, at least for me, is how do I respond to coaches and players in a manner to bring them down so that we don’t escalate the situation,” Capers said. “They’re not really saying anything malicious. It’s just that since there is nobody there, you can hear them.”

And conversations that never would have happened at all — say, after someone in the second row on the bench yells at the referees at the opposite end of the court — have now become part of the discourse. That, too, has led to a lot of shifting to make sure that play doesn’t lose its flow.

“It has been communicated: ‘Hey, use common sense here,'” Tiven said. “There’s things you are going to hear in this environment that you would never have heard in the last 25 or 30 years or even before that. …

“[The league office has] also asked us to try to monitor and use good judgment when it comes to giving technical fouls on things we definitely would not have heard ordinarily. There seems to be a little leeway there.”

Those interactions are also now on display to a wider audience. Viewers can hear refs’ explanations of calls to the scorer’s table or to coaches, similar to how NFL referees are heard on TV.

“[Referee] Tyler Ford said he’s determining who the Ed Hochuli of the staff is,” Tiven said, referencing the now-retired NFL ref known for his authoritative penalty announcements. “He’s watching the games and seeing who is really good and nice and smooth.”

The difference is, NFL officials have their calls amplified in stadiums; NBA refs are simply being heard because of the quiet environment. Regardless, they are certainly aware that a new audience is listening.

“After my first two games, I think I had six [replay] reviews, so I got a hundred texts from people who saw me on TV,” Capers said with a laugh. “I was happy after that first scrimmage, because now I know the process. And as I watched the tape after the game, I think it just adds to showing the audience our knowledge of the game and how hard we work.”

OFFICIALS HAVE BEEN clear on one point: They call what they see, not what they hear.

But the lack of crowd noise has had the effect of boosting the on-court sounds, including potential fouls. After the first game of the restart between the Pelicans and Jazz, New Orleans guard Jrue Holiday noted how much louder a slap sounded during play.

Answer questions on the NBA playoffs and compete for $30,000 of guaranteed prizes! Make Your Picks

“One of my colleagues the other day said he was in a tough spot,” Tiven said, “but the slap of the arm was a firecracker going off, and it was so easy to hear that it really was the difference between knowing for sure it was a foul and being 94% sure it was a foul.”

While there may be the occasional moment when a referee will hear something that helps confirm whether a play was a foul, officials are mostly relying on the typical things.

“I’m so locked in that [it doesn’t impact me],” Capers said. “We have a principle to referee the defender. So when that reach happens, I know if it’s hand and ball, and I know that it’s wrist, and I know if he gets him.

“Because, people don’t talk about it, but basketball is a contact sport. We’re trying to figure out if it is marginal and incidental, versus illegal. So as long as I am locked in, and as long as I am doing my job and focused, I see it the same way.”

Fouls were up at the start of seeding games, but no more so than is typical at the beginning of each regular season. Teams averaged nearly 50 fouls per game in the first three days of games after the restart, but that went down to around 45 per game by the end of seeding play, mirroring what happened at the start of the season in October, when fouls were around 45 per game before settling in at 41 over the course of the entire season.

IN ONE WAY, referees were probably more prepared for life in the bubble than any other group in the NBA. During a typical season, they spend 20 to 24 days a month in hotels, traveling from city to city. It’s not quite three months in the same place, but it has helped prepare them for being away from home for this long of a stretch.

Of course, they miss their families. Like the players, the referees haven’t seen their families since entering the bubble on July 12. But players here after the first round of the playoffs will be able to have their families join them on campus. Referees selected to work through the NBA Finals won’t have that option.

Still, rather than having to wake up to catch an early morning commercial flight to another city after working a late game, referees now take a five-minute bus ride to an arena. And when the game is over, there is a guaranteed off day with no travel. 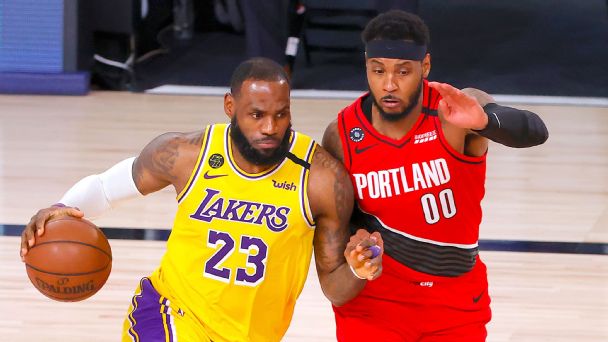 The NBA playoffs are live! Tune in here.

“Physically, I think it’s wonderful, in terms of not being mentally tired,” Blair said. “Sometimes you spend half a day just traveling to the next city instead of going five minutes down the road. I’m much fresher the next day. I’m not jet-lagged, I’m not mentally and physically tired because of the hustle and bustle.”

The down time has led to increased camaraderie. Foster has set up regular games of pickleball — a sport that is a combination of tennis, badminton and table tennis — that many take part in. They can get on the golf course once a week, on Tuesday mornings, assuming they don’t have a game. There is a basketball hoop set up in the referees’ room so they can play HORSE, as well as a pingpong table.

“When you can kind of relax because you don’t have a game that day, it’s fun,” Tiven said. “In this profession, you’re a lot of each other’s best friends. We see each other all the time, and we are all basketball junkies, we have that in common. So you’re basically hanging out and having fun with your buddies for those off days.”

When the referees arrived inside the bubble last month, McCutchen gathered them and said they had a choice: Embrace the moment or endure it.

“If you choose to endure it, every day is a burden,” he said. “If you are going to embrace it, and get closer with your colleagues and reach out and build a relationship with a colleague that you haven’t had time with during the past, I think there’s a real opportunity.”

While so much about this situation is different, the most important thing — the game — is not.

“We still have our standards, and that travels well,” McCutchen said. “Whether there’s fans or not, that part of the game remains the same.”

Luka, Ja, Zion or Trae: Which young star would NBA execs build around?