TEMPE, Ariz. — Whenever the Arizona Cardinals get back to work, rookie offensive lineman Josh Jones won’t have the same steep learning curve that his fellow first-year players have.

Sure, he’ll have to learn about life in the NFL and how to take care of his body, but Jones is already intimately familiar with the Cardinals’ offense. He ran an extremely similar scheme as a left tackle under coach Dana Holgorsen at the University of Houston last season — a version of the Air Raid that relied heavily on the run in the same way the Cardinals do.

Kingsbury and Holgorsen both come from Mike Leach’s coaching tree. Kingsbury played for Leach at Texas Tech while Holgorsen played under Leach at Iowa Wesleyan and then coached with him at Valdosta State and Texas Tech. In fact, Holgorsen hired Kingsbury to be an offensive quality control coach at Houston in 2008, kickstarting Kingsbury’s coaching career.

“There’s a lot of good synergy there,” Kingsbury said after Jones dropped to the Cardinals unexpectedly in the third round. “We’re so thrilled it worked out. We did not expect him to be there.”

The crossover was evident in some of Jones’ first virtual team meetings when some of the verbiage and terminology were the same. Jones, who Cardinals general manager Steve Keim has projected to play both left and right tackle, comes to Arizona not just with a familiarity of playing tackle in an up-tempo offense but playing tackle in an up-tempo offense with a mobile quarterback. He blocked for D’Eriq King, a mobile quarterback who ran for 674 yards and 14 rushing touchdowns during his junior season at Houston in 2018. That experience has prepared him to block for a quarterback such as Kyler Murray.

“He’s got to stay connected and these plays are gonna be extended and all that stuff,” Houston offensive line coach Brandon Jones said. “He’s played with a guy very similar. Obviously, Kyler throws a lot better than that guy did.”

Added Kingsbury: “He played at a high level. You look at the pass-protection stats, I think he gave up two pressures all year, which is incredible in the system he played in. The pulling, the getting out in space, different things we do, really play to his strong suits. I think just familiarity with a very similar system, playing in Dana Holgorsen’s offense, which we all kind of derive from the same place, I definitely think there will be a comfort level there for him that will allow him to hopefully play at a high level sooner than later.”

Jones’ senior year at Houston almost didn’t happen. After his junior year, he heard the criticism that he wasn’t facing strong enough competition while playing at a non-Power 5 school. Originally an Oklahoma State commit out of high school, Jones considered becoming a grad transfer, potentially to Oklahoma, for his final year.

He opted against it, returning to Houston to play for his fourth offensive line coach in four years.

“I think for me having four O-line coaches I was able to take certain things that they taught me that I liked and infused it into my game,” Josh Jones said. “I feel like that’s kind of what made my game whole today.”

When coach Brandon Jones got to Houston in January 2019, he saw a talented but underachieveing Josh Jones on tape. Brandon knew one thing, though: The kid could move. The two worked one-on-one and Josh put in extra time on his own to improve his technique. 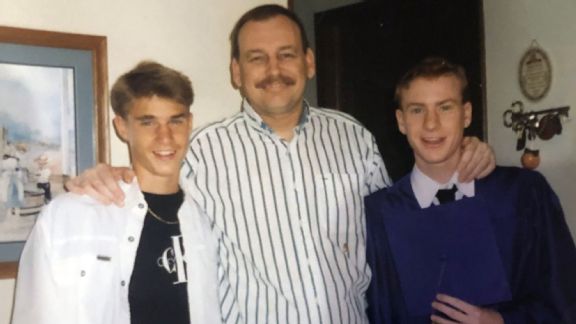 “His mentality changed, his work ethic changed and that helped him quite a bit,” Brandon said.

“I think we could’ve got maybe even a little bit more but he worked his tail off.”

On film, Kingsbury saw consistency, which impressed him considering Josh heard from four voices in four years. Kingsbury, who while at Texas Tech recruited Jones out of George Bush High School in Richmond, Texas — a southwest suburb of Houston — was able to rely on old friends to get all the intel he needed on Josh. Kingsbury and Brandon talked three times, including once at the combine. One of Kingsbury’s questions to Brandon was: Is he the real deal?

“I was like, ‘Yeah, he’s the best I’ve ever coached,'” Brandon said. “I’ve known Kliff since 2002 so he trusts me and I’ve been around the offense long enough to know good ones when I see it.”

“I’m shocked,” Keim said. “It’s certainly not a player that I anticipated seeing at the 72nd spot.”

Mallory Martin Turns Up The Volume