With Bryce Harper enthusiastically suggesting that major leaguers be part of the Olympics in 2021 when baseball returns to the Games, we put together a dream team of U.S. players to get the ball rolling.

Our 28-man roster includes Harper and Mets pitcher Marcus Stroman, who stirred talk of Team USA baseball in March via social media in relation to the 2021 World Baseball Classic. Stroman was one of the stars of the U.S. team that won it all in 2017, starting the championship game against Puerto Rico and pitching six scoreless, one-hit innings in an 8-0 victory.

Our only rule: No Astros. Hey, chemistry is an important thing in a tournament like this and those sign-stealing wounds haven’t healed yet. Can’t take the risk of some bad blood if, say, Alex Bregman has to dress next to Cody Bellinger.

In an era where the talent is a little thin overall behind the plate, Realmuto has established himself as the best all-around catcher in the game the past two seasons, with two Silver Sluggers and his first Gold Glove in 2019. I’ve written about Garver a couple of times this offseason and how I’m buying into his breakout 2019 when he mashed 31 home runs in just 311 at-bats, as a swing change produced legitimate pull power.

In the 2017 World Baseball Classic, Freeman elected to play for Canada in honor of his late mother, who died when he was 10. Both of his parents were born in Canada, so Freeman holds dual citizenship. For this exercise, we’re going to suggest playing for the U.S. in the Olympics lures him in. Alonso represents everything good about the game right now: He enjoys the game, he has embraced his role as a face of the Mets and the sport, and he just gets it. Earlier in the pandemic shutdown, he and Mets manager Luis Rojas called an 82-year-old woman, a longtime Mets fan who had been diagnosed with cancer and given only a few weeks to live. Oh, and he hit 53 home runs in 2019.

Muncy will probably play mostly first base for the Dodgers in 2020, but I’m taking him as the second baseman over DJ LeMahieu and Kolten Wong. LeMahieu certainly had an outstanding 2019, but I’m not completely convinced he can do that again. Muncy, meanwhile, has mashed 35 home runs in back-to-back seasons with a .381 OBP, and his defensive metrics are solid at second base.

Shortstop has obviously become a loaded position in recent years, and even with Francisco Lindor, Javier Baez and Carlos Correa anchoring the Puerto Rican team, we still have Trea Turner, Tim Anderson, Corey Seager and Paul DeJong to choose from. Still, Semien and Story are the easy choices and we can always move one of them over to second base to give Muncy a breather or if the opponent starts a left-handed pitcher.

We’ll go Yelich in left, Trout in center and Betts in right as our starting trio, and the only outfield that can top that would be Ted Williams, Willie Mays and Hank Aaron. Heck, maybe we’ll move Bellinger to first base and let Alonso serve as the DH. It’s fun managing an All-Star team! 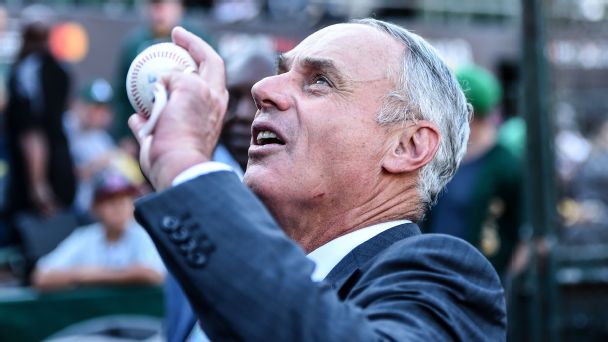 Signs are pointing to there being an MLB season in 2020. It’s just a matter of figuring out how, where and when. Jeff Passan’s 20 questions

Good luck scoring runs against this staff. Cole, deGrom, Scherzer and Strasburg will be the primary four starters, with the others working in relief. Snell and Corbin make the team to give us a couple of lefties in the bullpen — remember that Corbin tossed three scoreless innings in relief in Game 7 of the World Series for the Nationals. Who starts the championship game? I’m not giving that away just yet.

My initial plan was to go with all starting pitchers because why not, but Hader gives us a third lefty in the bullpen that we might need and Yates has been the best closer in baseball over the past two seasons, so they are both worthy additions.

You know, this little exercise has me thinking: What would be the ultimate one-season dream team? For example, the 1998 U.S. lineup could look like this:

New faces in new places, top prospects and more: What we're most excited for as spring training games begin

2021 MLB draft rankings: There's a No. 1 prospect ahead of Vanderbilt's two aces

Joe Solecki Is Soaking It All In

Nadal, citing back, withdraws from Rotterdam

Why trying to defend Wade Boggs was pretty much impossible