The New Orleans Saints’ legend can see it every time he goes to the Superdome, where a statue of the iconic play was erected outside, on the concourse.

But Gleason said he has never gone back and watched the game — that incredible, emotional experience when the Saints returned to the rebuilt Superdome for the first time after Hurricane Katrina devastated the city and forced the team to spend an entire season out of town.

U2 and Green Day gave their unforgettable pregame concert, Gleason blocked the punt that created one of the loudest emotional outbursts in sports history, and New Orleans beat the rival Atlanta Falcons 23-3 on Monday Night Football in the home debut of coach Sean Payton, quarterback Drew Brees, running back Reggie Bush and receiver Marques Colston.

ESPN will re-air that indelible game 8 p.m. ET Monday as part of its five-week Monday Night Football Classics series designed to provide “a small but welcomed distraction in the middle of a difficult and unprecedented time.”

Gleason is one of many former Saints who will be live-tweeting during the game and sharing their memories throughout the day.

“If you want the truth, I’m a bit nervous,” Gleason wrote of rewatching the game.

Gleason has since become an icon for an entirely different reason. He was diagnosed in 2011 with amyotrophic lateral sclerosis, also known as Lou Gehrig’s disease. And he has become a renowned advocate for those battling ALS and other neuromuscular disorders.

“In literal terms, [it has been] 15 years. But I’ve retired, gone to business school, started a new career path, been diagnosed with a terminal disease, revised my will, lost some longstanding friendships, had a glorious child with Michel, started a foundation, lost the ability to move and talk and breathe, hired people to wipe [and wash me], felt completely isolated and quarantined in the middle of a crowded room, descended close to death, gotten a tracheostomy, forged new relationships, made a documentary about all this, revised my will again, been tempted by the addiction of approval, shed my skin, ascended, passed a federal law, been called a hero, felt like everything besides a hero, had a second glorious child, gone bald, received the Congressional Gold Medal, and reside in one of the death zones of the COVID crisis… Whew,” wrote Gleason, who types his email responses through a technology that allows him to use a keyboard with his eye movements.

“In almost every sense, Michel and I have lived many lifetimes since Sept. 25, 2006. Going back to that day and that game is like going back to a dream. Oh, and I type with my eyes, so doing anything ‘live’ takes a lot of preparation. It should be a good learning experience, which I believe usually is preceded by a little nervousness.”

Considering that @espn is rebroadcasting the the #Rebirth2006 game of the @Saints vs @AtlantaFalcons game on April 6th, I’m shaking things up a little… #NeverPunt #Rebirth2020 pic.twitter.com/SUUgWAEgpu

Gleason, who still lives in New Orleans after marrying into a local family and having two children with his wife, Michel, first joined the Saints in 2000 and lived through the Katrina experience. So it was especially meaningful for him to make the game-changing play that resulted in a Saints touchdown 90 seconds into the game.

“I don’t watch sports fanatically, but from what exposure I do have, I’m not sure there is a better example of a game reflecting the experience and emotions of a community,” Gleason wrote. “Furthermore, the adversity, suffering, and ultimately, the resilience that the city of New Orleans endured and exemplified during the aftermath of Hurricane Katrina in 2005 & 2006, can provide an essential example for the current global crisis 15 years later.” 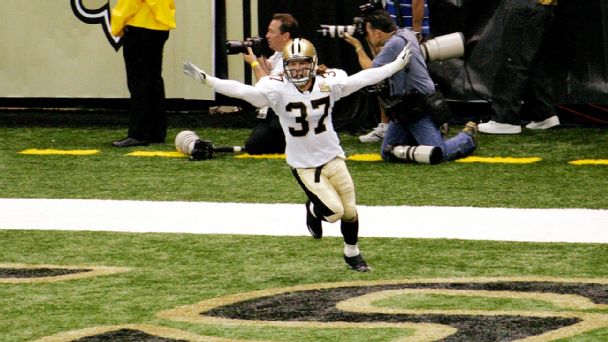 On Monday, April 6, ESPN will continue its partnership with the NFL in presenting some of the greatest MNF games in history. (All games begin at 8 p.m. ET)

“I’ve never heard anything like it in my life,” Kornheiser said. “And I’m never gonna. That’s it.”

Tirico added: “Maybe there have been louder decibel measurements of a reaction to a play. But I won’t experience one that will sound louder to me, personally, than that moment.”

When asked for his favorite memory of that game, Gleason said he loves to point out he’d never blocked a punt in eight years of high school or college — but then he blocked four of them in his NFL career, “the last of which announced the rebirth of this magnificent city.”

“I was well aware that the league was packed with guys who were bigger and stronger than me. I felt I had to get innovative with any and all of the resources at my disposal,” wrote Gleason, who was listed at 5-foot-11, 212 pounds.

Gleason was a backup safety, but he carved out a seven-year NFL career as a special-teamer. He credited former Saints special teams coach Al Everest — whom he called a “Jedi master to me” — for teaching him the art of blocking punts.

“Years later, I would rely on my NFL experience of acknowledging the challenge, and getting ultra innovative, when I would be diagnosed with ALS, a terminal diagnosis,” Gleason wrote.

The Saints’ organization has embraced Monday night’s rebroadcast. It’s not only as a welcome distraction for sports fans during the coronavirus pandemic but a reminder of how this city has overcome tremendous adversity in the past.

In addition to former players sharing their memories on social media, the Saints have asked fans to do the same. And they are encouraging fans to wear their Saints gear on a “black and gold Monday” just like they would on a real game day. They’re also holding a trivia contest and encouraging donations to aid hospitality workers and people facing unemployment throughout Louisiana.

#Saints legends will be live-tweeting the game, including @SteveGleason

We encourage fans to share their memories, photos, and videos from that day on social with the hashtag #BlackAndGoldMonday! https://t.co/47eK43LQio

“That game was such a magical experience and a symbol of what we can overcome and accomplish as a community,” Saints owner Gayle Benson said. “Our resilience, strength and care for one another is what defines New Orleans and is what will get us through this crisis just as we have overcome so many before.”

Other highlights to look for in Monday night’s game: