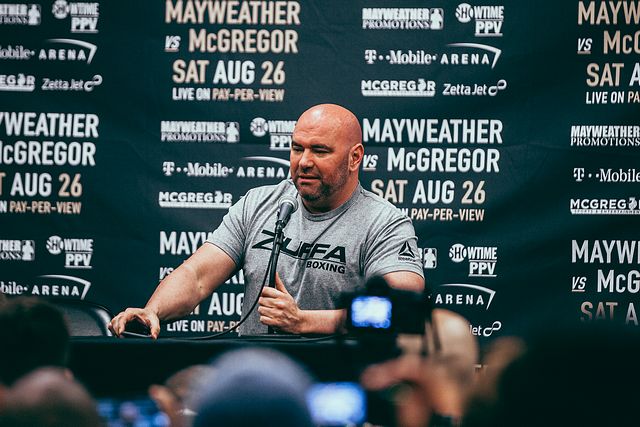 Dana White seems to be wavering on promoting Zuffa Boxing in the
near future.

After helping to promote the blockbuster boxing match between
Floyd
Mayweather and Conor
McGregor in 2017, the UFC president
vowed that he was “getting into boxing, 100 percent.” In the
months that followed White stood by those plans, even teasing an
announcement for this coming October.

While White currently has bigger issues at hand in trying to stage
a UFC pay-per-view during a global pandemic, he doesn’t sound
optimistic when it comes to the overall state of the Sweet Science.
That, in turn, has seemingly dampened his enthusiasm for his own
boxing endeavor.

“I hate speaking negatively about the sport of boxing, other than
the fact that it’s a mess – we all knows it’s a mess – and that it
needs to be fixed, if it can be fixed,” White said in an
interview with Yahoo Sports Kevin Iole. “I told you guys that I
would have a press conference last October and announce all these
things, but as I dove into this thing and started to look into the
sport of boxing, the economics of boxing, that sport’s a mess. It’s
a mess and it’s in big trouble. I don’t know. I don’t know if it
can be fixed.”

White balked at the notion of having boxing matches under the UFC
umbrella to potentially gain a larger audience for Zuffa boxing. A
centrally-focused event with one discipline is a far more appealing
prospect for the UFC boss.

“I believe that when you put on a UFC event or a boxing event, all
the focus and attention should be on that one event. You start with
the main event and then it trickles down into the card,” White
said. “There are some great fights that are lined up like, if you
don’t know now you know. There’s a couple of fights in there that
people might not actually know about that you focus on. And the
same thing for a boxing match. When you go to an event, any event,
you have to be focused on what’s happening on that card and excited
about it. . . You can’t mix and mash all those things together. It
just doesn’t work, in my opinion.”

White added that the audience for both sports is entirely
different. Those who attend a big-ticket boxing card like the
Tyson
Fury–Deontay
Wilder rematch might not necessarily be interested in seeing
Khabib
Nurmagomedov and Tony
Ferguson square off for UFC lightweight gold.

“You’re gonna bring out different groups of people for different
events,” White said. “Like when we do pay-per-views, it’s not all
the same buyers. For different fights, it’s different buyers. You
have that general group, the hardcore fans that are gonna buy
almost everything, and then different types of fights are gonna
bring in different people.”

Sean Woodson Has Been Grinding For Years