“The Rookie,” which airs on ESPN on Friday at 8 p.m. ET and is available on Disney+ anytime, tells the real-life story of Jim Morris, the former Tampa Bay Devil Rays reliever who went from being a high school science teacher to reaching the majors at the age of 35 — in a matter of months. It sounds like a too-good-to-be-true Disney movie, and it is a Disney movie, but it is true.

In the spring of 1999, Morris was coaching the baseball team at Reagan County High School in Big Lake, Texas. He was also throwing some serious heat in batting practice. In the movie, Morris promises his players that if they make the state playoffs, he will attend a major league tryout camp. It didn’t quite happen that way, but Morris did attend a Devil Rays tryout camp in San Angelo — although he wore his softball uniform, not jeans, as depicted in the movie. (I’d love to see the reaction to some 35-year-old guy showing up in jeans … and then throwing 98 mph.) 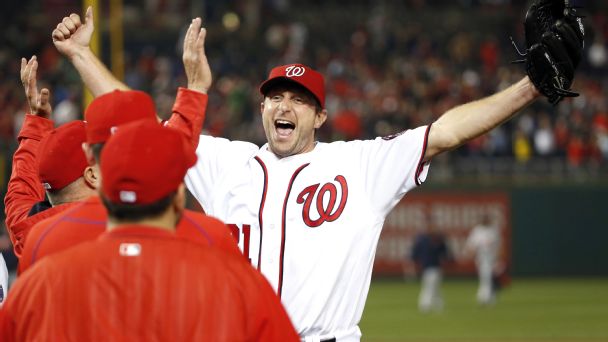 On Saturday, beginning at noon ET, ESPN will air four classic 20-strikeout games as part of “Strikeout Saturday.” How to watch

The 98 part did happen. Morris threw 12 consecutive pitches at 98, the Devil Rays brought him back out for another look, and next thing you know he’s in Double-A. Morris signed with the Devil Rays in June, spent two weeks in extended spring training getting in shape, spent one week in Double-A, got promoted to Triple-A and then made his major league debut that Sept. 18. He faced one batter, Royce Clayton of the Rangers, and, yes, struck him out.

Morris wasn’t a complete novice to professional baseball. The Brewers selected him in the first round of the now-defunct January phase of the draft in 1983 out of Ranger Junior College. He suffered several arm injuries in the minors and never got past Class A, missing all of the 1986 and 1988 seasons before finally retiring. His major league career lasted 21 appearances, five in 1999 and 16 in 2000. “The Rookie” came out in 2002 with 47-year-old Dennis Quaid playing Morris — perhaps a few years too old for the role and a little thinner than Morris was, but at least Quaid had the mannerisms of a baseball player.

The movie is accurate enough, although it takes a few liberties as most movies do, such as showing Morris testing his velocity with a roadside speed monitor. That never happened. And in the movie, Morris gives the game ball from his debut to his dad. That didn’t happen, either. He kept the ball.

Still, it was a remarkable feel-good story, the 35-year-old teacher pitching in the big leagues. Here were a few more memorable “old” debuts.

Satchel Paige: The Negro Leagues legend was 42 years and 2 days old when he made his first appearance for the Cleveland Indians on July 9, 1948. Well, approximately 42 years and 2 days, as Paige’s actual date of birth is uncertain. Paige was obviously past his prime and didn’t throw as hard as he once did, but he was still effective, going 6-1 with a 2.48 ERA as a rookie, pitching mostly in relief, but tossing two shutouts in five starts. He had another good season for the Indians in 1949, but they released him afterward when Bill Veeck had to sell the team, and Paige spent 1950 barnstorming. Veeck brought him back to the bigs with the St. Louis Browns in 1951 and Paige spent three more years in the majors, making the All-Star team in 1952 and 1953, then getting released after Veeck once again had to sell his team. Even at the age of 51 in 1958, he had a 2.95 ERA in Triple-A (but wasn’t called up to the majors). Paige made one last major league appearance in 1965 at age 58 as a publicity stunt for Charlie Finley … and tossed three scoreless innings for the Kansas City Athletics.

Chuck Hostetler: The oldest position player to debut, Hostetler’s first game came at 40 years, 210 days — and as you might suspect, it came during the 1944 season, when many major leaguers were off fighting in World War II (or playing for military baseball teams). Hostetler had most recently played in the minors in 1937 and had kept playing for the Boeing plant team in Wichita, Kansas. A local umpire who scouted for the Tigers and who had played against Hostetler in the Texas League reported to the front office that Hostetler still had good speed and could play. He went to spring training, made the club as Detroit’s fourth outfielder and hit .298 for the season.

Ken Takahashi: The oldest player to debut this century, Takahashi was 40 years and 16 days old when he appeared with the New York Mets in 2009. The lefty reliever had come to the majors after a long career in Japan. He pitched well enough with the Mets, with a 2.96 ERA over 27⅓ innings, but went back to Japan for one final season in 2010. There are several Japanese pitchers who have debuted at an advanced age in the past two decades, including Masumi Kuwata, (39 years, 74 days), Keiichi Yabu (36 years, 234 days) and Takashi Saito (36 years, 54 days).

Connie Marrero: One of a few major leaguers to live past his 100th birthday, Marrero died in Cuba in 2014 as a national hero, two days shy of his 103rd birthday. He reached the majors with the Washington Senators in 1950 at age 38, a few days before his 39th birthday, and made the All-Star team in 1951 at age 40. Unlike other Cuban players of the era or former Negro Leaguers, Marrero’s late entry to the majors was not a result of his skin color. As a light-skinned Cuban, he could have played in the majors (like Hall of Famer Dolf Luque), but instead spent 18 years or so toiling in Cuban amateur leagues before Senators scout Joe Cambria discovered him.

Billy Williams: Not the Hall of Famer, but an outfielder who played four games for the expansion Seattle Pilots in 1969. Williams had spent 18 years in the minors, starting off with Class D Norton (Virginia) in something called the Mountain States League in 1952. How about a movie on the 1952 Mountain States League? He spent the entire decade of the 1960s in Triple-A without getting the call until the Pilots finally summoned him to the majors in August 1969. Unfortunately, he would go 0-for-10 in his brief MLB career.

Alan Zinter: Since 2000, 45 position players have debuted at age 30 or older. Zinter is the oldest of the lot, playing his first game for the Houston Astros in 2002 at 34 years, 30 days. It was a long road for Zinter, a first-round pick of the Mets in 1989 out of the University of Arizona. He would go from the Mets to the Tigers to the Red Sox to the Mariners to the Cubs to the Seibu Lions to the Cubs again to the Diamondbacks and finally to the Astros. His first major league hit was a home run off Scott Williamson. He’s now the hitting coach for the Reds.