In the summer of 2007, Joe Douglas attended a University of Delaware practice and fell hard for a lanky, strong-armed quarterback named Joe Flacco, a relative unknown.

Douglas, a Baltimore Ravens area scout, had studied Flacco’s game tape from the previous year. Now, watching him live for the first time, he was smitten after only a few throws. Not concerned about the level of competition, he wrote a glowing report and submitted it to his bosses.

And they thought he was nuts.

“He put a big-time grade on him,” former Ravens general manager Ozzie Newsome said this week in a phone interview with ESPN. “Of course, we all go, ‘Joe, this kid is from Delaware. Really?‘ He stood by his grade.”

Prompted by Douglas, Newsome and the Ravens’ top decision-makers paid close attention to Flacco throughout the season and wound up picking him in the first round of the 2008 draft. Five years later, he was a Super Bowl MVP. The Flacco decision was a big win for the entire organization, but as Newsome noted, “Joe D. was the first guy to put his eyes on Joe Flacco.”

Those eyes now work for the New York Jets, who desperately need someone with a clear vision to lead them out of the NFL wilderness.

It starts next week for Douglas, who, after nine months as general manager, gets a chance to reshape the roster. With $50 million in salary-cap space and eight draft choices, including four in the first three rounds, Douglas has the resources to fill many, if not all, of the holes in the roster. He did some tinkering last season, but the first true test comes with free agency.

Can a first-time GM with a neighborly personality handle the crucible of New York and make the Jets a consistent winner?

For insight into Douglas, the best source is Newsome, one of the greatest tight ends in history, a member of the Pro Football Hall of Fame and a Wizard of Oz when it came to roster building. Newsome, who stepped down as the Ravens’ GM after the 2018 season, doesn’t do many interviews anymore, but he made an exception to speak about Douglas. That should tell you something about his feelings for his protégé.

Newsome hired Douglas in 2000 to be part of the Ravens’ 20/20 program, which got its name because they took twentysomethings with a football background, paid them about $20,000 a year and gave them entry-level responsibilities in football operations. They made airport runs, drove players to the doctor, stuff like that. Douglas landed the unenviable job of “The Turk,” the poor soul who tells players to report to the coach’s office so they can be released. He got some face time on TV because the Ravens were featured that year on HBO’s “Hard Knocks.”

“They learned the business from the bottom up,” Newsome said of his 20/20 grunts.

Douglas spent 15 years under Newsome, the last few as a national scout. Now he’s in the big chair.

“It’s something he’s up to,” Newsome said. “He came into [a] unique situation. He came in after the draft last year and after free agency, so there wasn’t a whole lot he could do from the time he got the job until the end of the season. In that situation, he got a chance to find out about the roster and get accustomed to [coach Adam] Gase and [defensive coordinator] Gregg Williams, and get a feel for what they want. Having all of that will help him this offseason with getting better personnel on the Jets.

“Now he can start to put his footprint on the Jets. Now you get a chance to see him.”

Newsome described Douglas as an astute talent evaluator, a careful listener and a processor.

“He’s not one of those guys that just offers up opinions,” Newsome said. “He’s a guy that wants to accumulate as much information that’s available to him and then make a decision. To me, he’s a processor. Regardless of how fast things are moving sometimes, Joe D. is going to be solid and he’s going to be right down the middle. And he’s going to come away with a good decision.”

Big decisions await. Does he pay wide receiver Robby Anderson, a pending free agent? How does he overhaul the offensive line? How much is Jamal Adams worth on a long-term extension? What if he receives a tempting trade offer for the star safety?

Douglas has been influenced by many in his career, which included stints with the Chicago Bears (2016) and Philadelphia Eagles (2017-19), but his forever mentor is Newsome.

“Ozzie’s consistent. Ozzie’s patient. Ozzie is not going to get wrapped up in emotions when he’s making decisions,” Douglas said. “He’s not going to get wrapped up in perceived needs. He’s going to do what’s best for the team short and long term. I’ll never compare myself to Ozzie Newsome. Ozzie should be in the Hall of Fame twice, as a player and as a GM, but being around him for 15 years was a true joy, and I’m very blessed to have done it.”

ESPN draft analyst Todd McShay, a former college teammate of Douglas’ at the University of Richmond, said, “[Douglas] learned so much from Ozzie Newsome and that staff in Baltimore. That’s where he grew up. He’s had a couple of other destinations, but Baltimore is where he was raised.”

Douglas will be his own man, but he likely will base much of his philosophy on the Book of Oz. If so, this is what it could mean for the Jets: 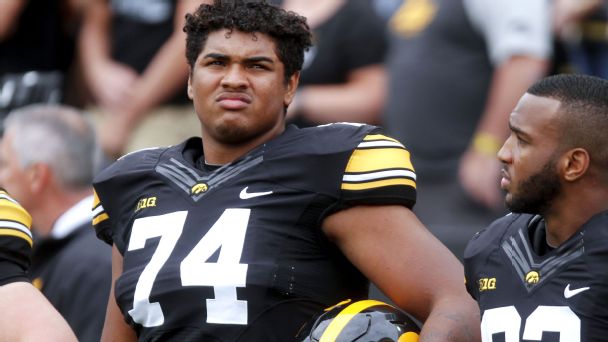 • Giants to draft a tackle with No. 4 pick?
• Brockers to step out of Donald’s shadow
• Raheem Morris isn’t giving up on HC job
• Jets GM to put ‘Ozzie’ schooling to work
• Predictions for every team’s top free agent