MISSISSAUGA, Ont., — Canadian basketball phenom R.J. Barrett has seemingly always played at a level ahead of most guys his age.

As a 17-year-old, the six-foot-seven swingman won tournament MVP honours en route to Canadian gold at the FIBA U19 Basketball World Cup in July 2017.

And this past June, the 18-year-old fit right in during his first call-up to the senior national team.

So it should be no surprise that Barrett — after reclassifying to attend college a year early — shone in his Duke Blue Devils debut with a game-high 34 and 35 points respectively in their first two pre-season games at the Paramount Fine Foods Centre in Mississauga, just minutes from where he grew up.

“It’s just [about] being competitive. I think I am really good. I think I belong here,” said Barrett.

Barrett’s head coach Mike Krzyzewski has been impressed by his basketball intelligence and engagement on the floor. (Chicco Nacion/CBC Sports)

Legendary head coach Mike Krzyzewski could sense Barrett’s oozing confidence before he even saw the Canadian play in person. Barrett left quite the impression on the hall of famer just from his game tape at last year’s U19 tournament.

“He’s kind of old school in the fact that he [played like he] was older. He had such a winning mentality and it translated to the guys playing with him,” said the longtime Duke head coach. “I loved his strong face — how he led his team — he just looked older and in command … he’s way ahead of his years as far as maturity.”

The Mississauga, Ont., native’s excellent footwork gives him options — like the euro step — when attacking the basket to create separation from his defenders and different angles to score.

While Barrett provides defensive versatility and length with his six-foot-ten wingspan, Bilas was also impressed with his unselfishness and playmaking skills on the floor.

Despite Barrett’s meagre four assists over the pair of games, it wasn’t as if the intent to share the rock was missing.

On one occasion against the University of Toronto, Barrett was able to draw the defence in one direction with a ball fake, leaving a teammate open in the corner for a three-pointer. There were plenty of other times in which Barrett simply used his eyes to direct his teammates towards the basket or in fellow freshman Zion Williamson’s case, an incoming alley-oop feed.

R.J. Barrett to Zion Williamson for the alley-oop. Could be the first two picks in the 2019 NBA Draft <a href=”https://t.co/tXxmKD3GWw”>pic.twitter.com/tXxmKD3GWw</a>

“Me and him just have a really great connection. We can make eye contact from different sides of the court and just know that we can run it. Even if the crowd doesn’t think we’re going to throw it, we’re gonna throw it,” Williamson says.

The closeness between Barrett and Williamson is evident. They’ve created their own custom handshake, roomed together for the summer, and speak regularly through their group chat with teammates Tre Jones and Cam Reddish.

Together, the four are one of the most hyped freshman classes since the University of Michigan’s infamous “Fab Five,” whom Krzyzewski likes to remind reporters were beaten by his squad in the 1992 national championship game.

Barrett, Williamson, and Reddish were ranked Nos. 1, 2, and 3 respectively by ESPN for the class of 2018 while Jones slots as the second-best point guard at No.17 overall.

Throughout the summer and throughout Duke’s Canadian pre-season tour, their every move has been followed and it’s been comforting for Barrett to know that he’s not alone.

“I’ve always played with high-level competition my whole life. But to be on a team with Zion, Cam, and Tre — guys of that calibre — we all kind of get it,” Barrett says. “We’re all going through the same thing. It’s great to have guys like that to help you out.”

But it’s their own self-confidence that could prove even more vital.

“They’re not concerned about somebody else usurping or nudging them aside. They’re very secure in who they are so they’re quick to be able to make one another better,” Bilas says.

While each freshman was “the man” at his high school, each committed to Duke knowing the spotlight is shared.

“It doesn’t bother me at all because this is what I signed for. You don’t come to Duke thinking you’re about to get 30 shots a game,” Williamson says. “It’s whoever is feeling it … Coach K has done this before with Team U.S.A. so we all trust him and how he can play us [best].” 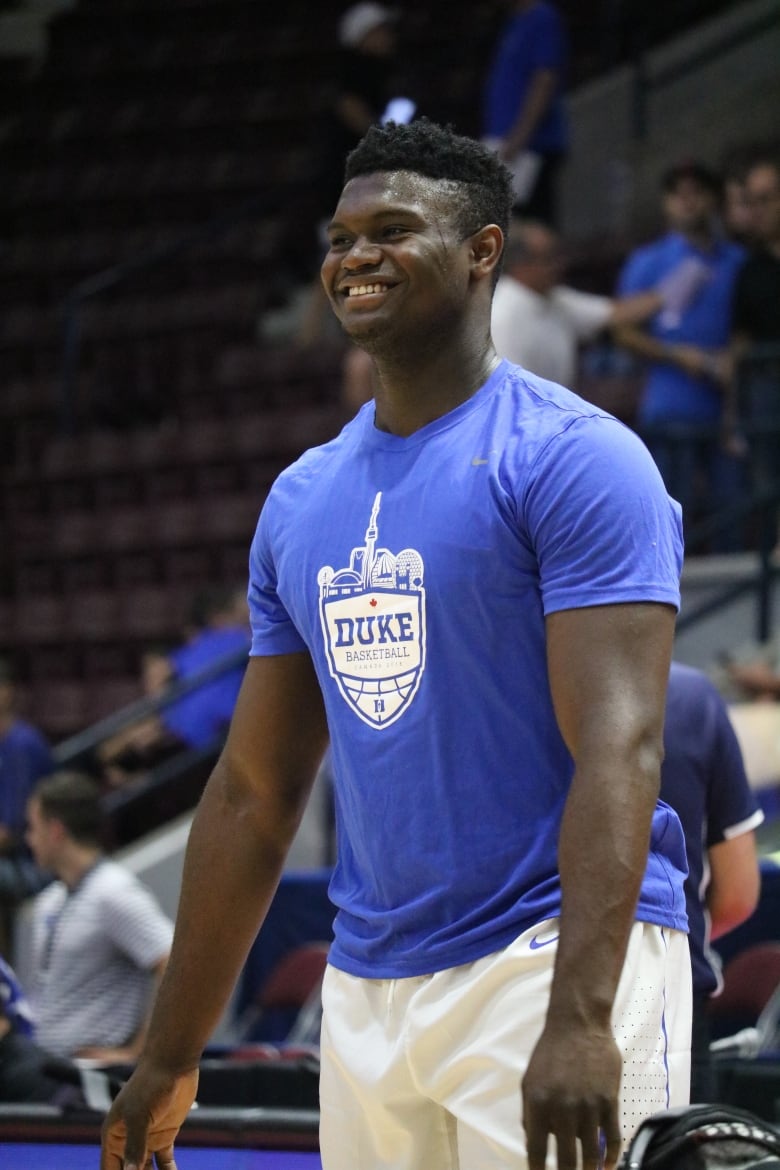 Williamson, above, is happy to share the court with Barrett and says they’ve developed a brotherly bond. (Chicco Nacion/CBC Sports)

Krzyzewski is no stranger to managing such talent, having coached the U.S. men’s basketball team through their recent run of three-straight Olympic golds.

With every recruit, the 71-year-old makes it a point to be honest and upfront regardless of whether they choose to attend Duke. Krzyzewski believes doing so establishes belief in his vision and from that, a trust is established.

Before the playbook is even touched, Krzyzewski holds a team supper — which he refers to as a values meeting — outlining exactly what it means to put on a Duke jersey.

“What are the values of our program? [We] talk about them whether they be integrity, trust, selfless service, loyalty before you get to an offence or defence and it’s worked with me, not just with Duke but with the U.S. team,” Krzyzewski says. “We just don’t play for [Duke], we are [Duke]. If you believe, you have a better chance of doing well.”

In his short time at Duke, Barrett appears to already have an understanding of this.

“He’s been around a long time so he knows a lot about the game,” Barrett says. “He just has a lot of knowledge and I like learning from him every day.”

Kawhi (sore foot) out until at least next week

Former Raptor's GM Glen Grunwald heading back to NBA with the...