Thirty years old is the usual age for someone to take a look at where they’ve been, where they’re at and where they’re going in life. It’s the time to say, “Okay, I’m an adult now.”

Andre Fili has made that leap. At 28.

“Maybe I’m early to the party,” Fili laughs. “It’s the first time I’ve been early to anything in my whole life. But I feel great and it’s cool. I was actually dreading turning 28, and then I turned 28 and it was this weight off my shoulders. I’m so far away from being a kid and I’m smack dab in the middle of being an adult and I embraced it and I’m enjoying it. I just feel good and I’m completely at peace where I’m at right now.”

“At peace” isn’t the usual thing heard before a prizefighter makes his walk into battle, but Fili has never followed the conventional path, and if he’s at peace heading into his Saturday co-main event against Michael Johnson, that’s not a bad thing. It’s the Fili Way.

“I’m ready to perform, I’ve got the perfect amount of anxious nerves, I’m excited but I’m not overthinking it or underselling it – I’m right where I need to be and I’m ready to go out there and fight,” he said. “I just want to go perform, get this win and keep this ball rolling. It’s all I care about.”

It took a while for the ball to get rolling for the Californian, at least in the UFC. A member of the roster since 2013, Fili entered the Octagon on short notice against Jeremy Larsen after making quite an impression on the local circuit at 145 pounds. He made such an impact that the 12-1 prospect couldn’t get a fight, leading him to desperate measures before he got called to the big show.

“I cleared out everyone in my region and I couldn’t find a fight at 145,” said Fili. “Before I got signed to the UFC, I was jumping up to 170 from 145 to fight a local champion who’s now in the UFC, Max Griffin. The UFC was not paying attention and I said I’ve got to do something big.”

But with Fili on an eight-fight winning streak, he was feeling unstoppable.

“I was eating Chipotle every day, on a long win streak, feeling like I was the man and could do whatever I wanted,” he laughs. “And my manager called me and said, ‘Hey, you want to be in the UFC, here’s your chance. Can you make 145 in two weeks?’ I was 178 pounds. I said, ‘Two weeks, no problem.’”

Fili missed his mark against Larsen, coming in at 148.5 pounds for the UFC 166 bout, but a second-round TKO win made up for that. Then things got interesting, and not in a good way.

“What was scary was going win-loss-win-loss-win-loss for three years,” said Fili, whose record from after the win over Larsen to a 2017 loss to Calvin Kattar was 3-4. “That was scary and that was the real test. I got to the UFC and hit this weird rough patch and I’d be lying if I didn’t say that there weren’t some dark times. Taking a big step forward by beating Hacran Dias, the number 11 guy in the world on three weeks’ notice (in 2016) and then you lose a fight and everyone goes, ‘Oh, never mind.’”

The Team Alpha Male fighter obviously had talent. Consistency was what he was lacking, but after wins over Artem Lobov and Dennis Bermudez in 2017-18 gave him his first winning streak in the UFC, he appears to have found his mojo at the perfect time.

“The last couple fights I started focusing on the things that are really important, things that I can control, and that’s myself, my preparation and my performance,” Fili said. “Everything else is background noise to me. It doesn’t matter much. It’s obviously cool to get more attention for your fight, being the co-main event and being on the poster, but all that really matters is going out there and performing and getting a win.” 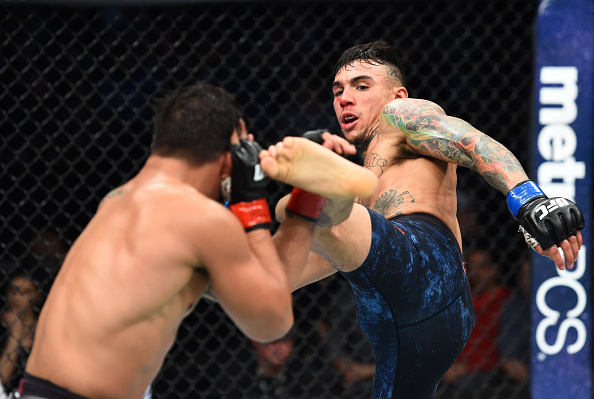 Wow, what happened to the fun Andre Fili?

“He’s still there, he’s just a little more focused now,” laughed Fili, who does have a tattoo appointment with the renowned Nikko Hurtado on the Monday after his fight. He also has a full slate of activities planned with his girlfriend, friends, nephew and sister for late summer. But the way he sees it, nothing happens without a win in Lincoln, Nebraska on Saturday.

“I’ve got all these things I want to do and all these people around me that I love that I want to spend time with,” he said. “But right now, it’s all about winning this fight. And all that stuff I want to do, that’s the reward for all the hard work.”

Sounds like he’s figured out the whole 30 years old thing two years early. Or maybe not.

“I’m sitting in my underwear at my kitchen table, eating some eggs right now, and if he (Johnson) walked in my front door, I’d fight him for 15 minutes in my living room. That’s how ready I am.”

Yeah, the old Andre is still there.

“The times they are a changin’,” he laughs. “But a tiger can’t change his stripes too much.”

That’s good, because in a sport filled with interesting personalities, Fili is certainly in the top ten. That makes you realize that whatever he chose to do in life, odds are that he would be successful at it. But he chose fighting.

“I just love it,” Fili said. “I wish I could give you one solid answer, but I just love fighting and I’ve always loved it. I love that feeling of being in that chaos and coming through it with your hand raised. There’s that moment when you’ve knocked a dude out, both your hands come up and you’re screaming and the crowd’s screaming and your corner’s jumping up and all the lights are on you and all the eyes are on you and all the hard work’s paid off and you just get to be the man for 30 seconds. There isn’t another feeling like that.”

Israel Adesanya Focused On Showing Up, Showing Out

One fatal flaw for each remaining NBA playoff contender

5 Raptors ruled out for rescheduled game vs. Pistons due to COVID-19 protocols

Israel Adesanya Focused On Showing Up, Showing Out

Paulo Costa Believes He Was Born To Fight