Justin Gaethje doesn’t believe that James Vick understands what it will actually take to step into the Octagon and hand him a third straight loss when they collide in the main event of this weekend’s UFC Fight Night event in Lincoln, Nebraska.

“I don’t think he’s mentally prepared for what he’s going to have to go through on Saturday night and I can’t wait to see the terrified look on his face,” said Gaethje, who enters the contest following back-to-back stoppage losses to Eddie Alvarez and Dustin Poirier, the first two setbacks of his career.

The entire build to this fight has been a back-and-forth between the two combatants, with Vick calling Gaethje “The Homer Simpson of the UFC” and the former World Series of Fighting lightweight champion questioning his impending opponent’s character when he steps into the cage.

What’s interesting about that Simpsons reference that Vick keeps turning to is that while Homer’s “absorb shots until they tire themselves out” approach is atypical and not one you would recommend to any other fighter, real or animated, he makes it work and lands a lucrative Pay-Per-View showdown with former heavyweight champion Drederick Tatum as a result.

Like the patriarch of the Simpson clan, Gaethje has made his all-action, demolition derby approach to fighting work for him inside the cage, rattling off 18 consecutive victories before falling to Alvarez and Poirier in his last two outings.

And while the results were certainly not what he wanted, the 29-year-old Trevor Wittman pupil knows what it took for Alvarez and Poirier to walk out of the Octagon with their hands raised on those nights and he’s pretty sure that his dance partner on Saturday night hasn’t prepared himself accordingly.

“You have to mentally prepare for what you have to go through to beat me,” said Gaethje. “Dustin did it and Eddie did it and you didn’t hear either of those guys saying any of the things this guy is saying and for good reason. They knew that they were going to have to dig deep, that they were going to have to overcome adversity and they both did a great job at doing that.

“Everyone I’ve fought for the last number of fights have been mentally prepared to go in there and fight their a** off, and if what he’s saying is true, it’s going to be the most terrifying night of his life.”

The last four months have been a period of evaluation and adjustment for Gaethje, who always accepted that the time would come where he would be on the wrong side of a stoppage loss.

After being felled by Alvarez and having his unbeaten streak snapped, he felt relieved that he no longer had to carry the burden of being an undefeated fighter, but not like there was anything in particular he needed to change about his approach in the cage. But after getting stopped by Poirier in his home state of Arizona earlier this year, Gaethje knew he needed to sort a few things out before returning to the Octagon.

The key thing he’s identified as he readied to step back in against Vick on Saturday night is that he needs to not get complacent and remember at all times that a single well-placed shot can shift the momentum of a fight in a flash or bring it to a sudden end.

“Every time I come back to the corner, my coach is going to be in my face telling me not to be comfortable, not to become complacent,” said Gaethje, explaining how he’s been working on integrating fear and a sense of urgency back into his fighting style. “He’s going to remind me that it only takes one shot and I can’t let that happen.

“The Eddie fight, I landed four huge uppercuts and I almost couldn’t believe he was still standing and then BOOM – big knee right up the middle. There’s no reason I should have forgotten who I was fighting or the level of competition I was fighting.

“Dustin, my game plan was to go in there and break his leg,” he continued. “If you watch the fight, I was well on the way, but I just started kicking instead of throwing my hands and setting it up with punches, taking different angles. I just went out there and started throwing kicks instead of biting down and fighting the way I should be fighting at all times.”

Gaethje’s approach has produced four post-fight bonuses in three outings and a trio of main event assignments in his first four UFC appearances, achievements that are not only a point of pride for the Safford, Arizona native, but also contribute to why he’s so put off by what he views as a sense of entitlement from the man he’ll share the cage with this weekend in Nebraska. 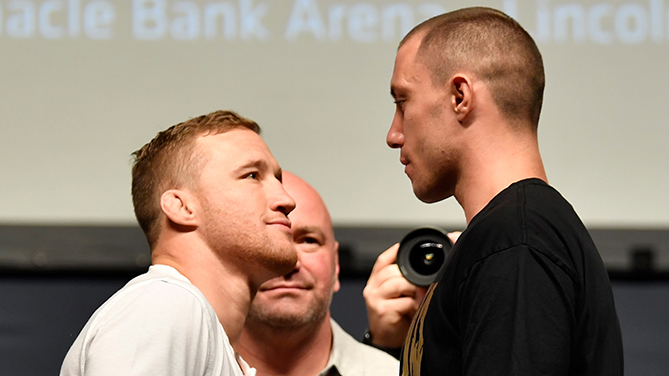 “Three out of four main events and coming off two losses, they’ve got me in the main event, (plus) four bonuses in three fights; that’s something that speaks for itself. You have to earn those things; that’s not something that is just given lightly in the UFC. Those things must be earned and I earned every single bit of it.

“The only reason James Vick is fighting in the main event is because of me and because Al Iaquinta pulled out of this fight,” Gaethje added. “As an athlete, he represents all of us and he doesn’t want to go through the process. He wants things given to him and that’s not how this world works.”

Racking up bonuses and putting on exciting fights has quickly become Gaethje’s calling card in the UFC, just as it was in World Series of Fighting before that, but it’s not something the lightweight standout does purposely.

He’s not walking into the cage thinking, “I want to make this exciting” or “I want to get Fight of the Night” – he’s just doing what comes naturally to him and that’s precisely what he plans to do again on Saturday night, all while putting Vick through the most torturous night of his professional life.

“That’s just who I am and how I fight,” said Gaethje. “I’m not doing it to be known as ‘The Entertaining Fighter’ necessarily – I am who I am and I’m not going to go in there and fight myself. I’m going to let myself be free under the circumstances and if he can take it like the last guys and pull through, props to him, but James Vick cannot and will not.

“He really does go in there and tries to avoid conflict, which I do not respect,” he added. “When he got knocked out, he laid on the ground for an extended period of time; I do not respect that. You’re either a fighter or you’re not and those things are proving grounds. You don’t lay on the ground for that long when you get knocked out, especially when you’re not all the way asleep.

“I hope he lasts three rounds because that means I get to kick him at least 20 times, but I’m always in there to finish the fight as soon as possible.”

Djokovic: 'It's Kind Of A Gamble To Play'